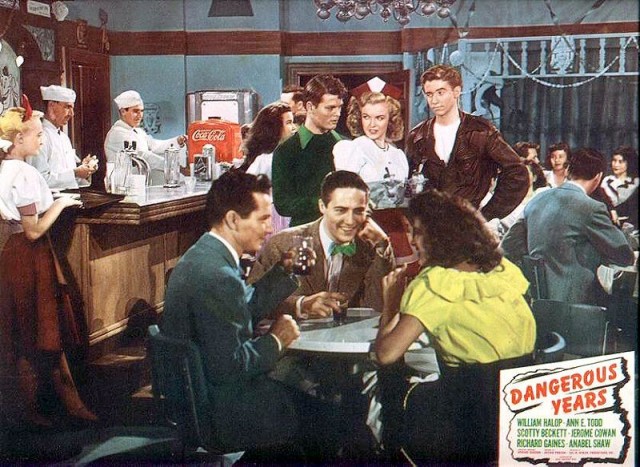 The various DVD-R archive series from the major studios over the last decade have certainly helped to get many forgotten films back into the public domain, and also replaced poor quality bootleg copies with pristine ones.  Some of the films involved have been revered classics, others are not so – and yet sometimes just as interesting in their own way.

Dangerous Years (1947) is one of those not-very-good and yet interesting films.  It is chiefly remembered today for being the first film appearance of a young Marilyn Monroe (centre. below), playing a waitress in a couple of scenes and, it should be said, with a very different voice to that which we are used to!  Monroe’s appearance alone would make the film an interesting curio, but the presence of Billy Halop (here called William) and Scotty Beckett add to the film’s worth for fans of 1940s cinema.

The film, which runs only just over an hour, is a heavy-handed tale of young men going astray during the “dangerous years” of adolescence.  Billy Halop plays Danny Jones an older boy (“of voting age”) who heads/controls a gang of sixteen and seventeen year olds who carry out robberies and, of course, one night it all goes wrong and somebody gets killed.  The rest of the film is dedicated to the court trial of Danny, together with flashbacks to the night of the crime.

The younger members of the cast manage to make the most of their clumsily-written, clichéd roles of naïve troubled kids with hearts in a story with far too many twists and turns, but it is the adults who drag the exercise down, barely speaking a line that doesn’t come across as contrived.  Clearly intended as something of a morality tale, the film comes across as remarkably preachy and one only can wonder what youngsters at the time thought of what they were seeing.

And yet the cast still makes it intriguing.  Billy Halop plays the central role of Danny in his first (and only) major role after four years away from the screen, after fighting in World War II.   While Halop performs well, much had changed during those four years.  His youthful looks had disappeared, and here he looks considerably older than his twenty-seven years (see above, left).   He is, in fact, almost unrecognisable.  It would be his last major role in a film, only intermittently on screen afterwards, and then only in small or uncredited roles.  In the 1970s, he would have a recurring role in All in the Family, but looked two decades older than the fifty-something man that he was (see below, right).  He died of a heart attack at the age of fifty-six.

Also of interest is the appearance of Scotty Beckett, who played the young Al Jolson in The Jolson Story just the year before (below, right).  This was his last film before being signed to MGM for what must have seemed at the time like the opportunity to forge a career as a leading man (he had been a prolific child actor).  Here he steals the show as the troubled son of an abusive father, somehow adding an element of realism to the clunky dialogue and turning his role into a foreshadowing of the type that Sal Mineo would play during the mid-1950s.  However, his career at MGM would be short-lived as his behaviour became erratic and he was arrested for drunk driving.   After earning a part in Rocky Jones, Space Ranger on TV in the 1950s, he was arrested again, and subsequently fired.  As he left showbusiness, more arrests followed, and he passed away at the age of thirty-eight. 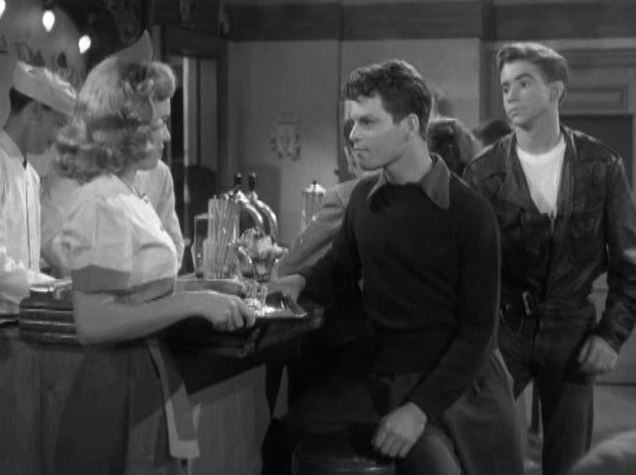 Dangerous Years might well have been a prophetic title for the times that were to come for three of its stars, all of whom would die young:  Marilyn Monroe, Billy Halop, and Scotty Beckett.   However, while the film is hardly a masterpiece, 20th Century Fox have to be applauded for rescuing it from complete obscurity with their good quality archive release (a far cry from the barely watchable version that could be seen on YouTube prior to the DVD issue).  Despite its heavy-handed approach, it is certainly interesting to see how the talent of the young stars make it still watchable – two of which were already approaching the end of their cinematic careers, while the third was only just embarking on hers.

I’m a 46 year old, living in Norwich, UK. I have a PhD in Film, Television and Media.  My published works include guides to the music of Elvis Presley and Bobby Darin, as well as a monograph on early queer cinema.  I am also the author of the young adult novels Breaking Point and Breaking Down, both of which deal with the subject of homophobic bullying and its aftermath.  My adult novels are The Successor and The Pied Piper, both of which are set in my native Norfolk.

I  have also published articles and chapters on the reception of Boris Karloff and Bela Lugosi, and silent horror films (both with Mark Jancovich); the silent film star Jack Pickford; queer silent cinema; queer horror movies;  the first African-American director, Oscar Micheaux; the teen TV series Kyle XY;  representations of bipolar disorder in the TV series Rookie Blue; and depictions of racism, xenophobia and anti-Semitism in the works of Agatha Christie.

Please visit my blog on mental health issues in the media: http://mentalhealthmediame.wordpress.com/